Those were words spoken by an Instructional Assistant at Pine Glen Elementary school during last week’s Hour of Code.

The third grade student she works with is typically highly dependent. The student needs frequent breaks, constant help, prompting to focus in order to complete work, and continuous approval. However, during Hour of Code, her student didn’t ask for help once. In fact, when she offered to help, the student refused. He didn’t take one break. He stayed focused for the entire hour and when the “official” Hour of Code lesson ended, he kept going. He was completely immersed in learning Lightbot and soared through each level, independently making it to the more complex procedures level. This Hour of Code success story is just one of many throughout the Burlington district during last week’s Hour of Code. It was incredibly rewarding to witness students at the elementary, middle, and high school levels work both independently and collaboratively to problem-solve, think critically, and persevere through the challenges presented.

“Not only have they had to use logical thinking, which is not something they typically choose to do, but they’ve persevered through this. They’ve listened to the tutorial. They have been helping each other, working collaboratively. It’s built community in our classroom. It’s built confidence in struggling learners. It’s really been a great week.” I visited Lynne’s class on Monday, December 8th and after a quick introduction to Hopscotch, the students were left on their own to explore and experiment with the creation of their own games. To help students understand the fundamentals of coding, I borrowed the analogy of “coding is like giving a dog commands” from the Code with Karel the Dog tutorial. This basic explanation was highly effective with the elementary students I worked with; both with Lynne’s third graders as well as the district’s youngest coders. Mrs. Sosnowski (Mrs. “Ski”) and Mrs. Maiorana students were easily the most excited students I worked with all week (not to mention adorable) and they quickly understood that they were responsible for creating the commands which enabled the program to run. Lynne’s students were so engaged with Hopscotch that they continued to code throughout the rest of the week.

I was invited back to her class on Friday so students could show me the progress they had made since the lesson on Monday. I was amazed at the advanced level of coding these novice programmers had accomplished. Students had discovered the Hopscotch emojis, created full-blown fire-ball monster games to play on their iPads, and wowed me with their dancing turkeys. After Tweeting out a picture of several student programs, Hopscotch commented stating, “that’s a lot of code! What did they make?” Our Twitter conversation continued briefly and resulted in a Live Google Hangout On Air (embedded below) which allowed students to speak directly with Alish Ermanshare, who created many of the Hopscotch Hour of Code video tutorials, as well as Ian Frye who handles their social media. Students showcased their creations directly with the folks at Hopscotch and to say they were impressed is a massive understatement! “That was an experience they will never forget,” stated Lynne.

During the week of coding in Burlington, students also realized the amount of testing and trial and error involved in creating a successful program. This was especially evident last Thursday when I visited Jill Cuhna and Valerie Doherty’s third graders at Pine Glen. Throughout their Hour of Code, most students worked in teams of two to four helping each other progress through each level of Lightbot. Jill, Valerie, and I offered our assistance to the 26 third graders in the room, but for the most part, students were helping each other without any adult intervention. In fact, there were a few levels of Lightbot that students helped me complete! When Hour of Code was over and indoor recess began, the majority of the students chose to continue with Lightbot (this happened in first grade classrooms as well). To see students sacrifice recess to code was another highlight of the week. Similarly, Marshall Simonds Middle School students also chose to give up their leisure time to embark on an Hour of Code. 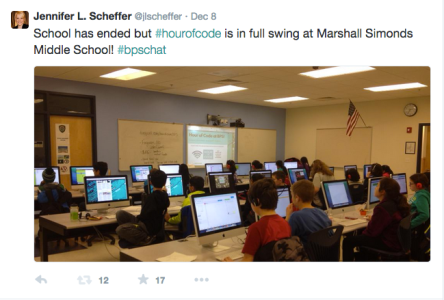 Approximately 30 of Jennifer Tate’s Math Olympiad students gathered after school last week to pursue learning an hour of code. During my visit with these students, I realized their level of intrinsic motivation to learn and understand computer programming was unparalleled. Several students claimed the tutorials were “too easy,” as they had been programming with HTML, JavaScript, and Python for close to three years. Needless to say, this session of coding was filled with students selecting the more challenging tutorials. Several of these students, the ones who were exploring the tutorials reserved for the high school level, had the opportunity to receive help from Eric Calandriello, BPS IT staff member and BHS alumni, who is currently majoring in computer science at the University of Massachusetts at Lowell. In addition to the members of the Math Olympiad team, sixth grade teachers Barbara Sturtevant and Carolyn Crowley shared with me that they also had their students participate in Hour of Code and my colleague Kelly Floyd, Instructional Technology Specialist at Marshall Simonds, had our middle school Help Desk students participate in Hour of Code. Highlights of these students, along with many others from the Burlington district who participated in Hour of Code are included in the video shown below.

Finally, at the high school level, BHS art, math, digital literacy, and Help Desk students all had the chance to try the Hour of Code. Art teacher Christina Chang brought two of her design classes (one of which was all female) to the Help Desk to complete an Hour of Code and the feedback from these young ladies was tremendous. Freshman Sara Cannalonga said, “I really enjoyed Hour of Code because it was something I have never experienced before and it was a fun thing to do while at the same time learning something.” Along those same lines, many BHS Digital Literacy students enjoyed their time spent on coding. I asked both of my digital literacy classes to complete four Hour of Code tutorials, including the creation of a holiday card using Scratch, and write a reflection about their experience on their blogs. Many of my students found Scratch difficult to understand, however despite the difficulty, many are still interested in learning more about computer science. In her blog post reflecting on the Hour of Code, freshman Meghan Gaffney stated, “After doing my second year of Hour of Code, I am really interested in learning more about coding. I really like to code and I want to continue coding even after the Hour of Code ends.” Senior Help Desk member Cat Hoyt added,

“Having completed Hour of Code I don’t know if I would say I am more interested in exploring the field
of Computer Science as much as I would say I am interested in exploring the ways that Computer Science
and coding can develop me as a student and the way in which I learn. I think that being given the chance to
participate in Hour of Code has allowed me to use my brain and think in ways that I never have before and that
participating in this experience can be beneficial to students and teachers alike because it promotes new styles of
critical thinking that can be applied in many situations aside from the field of Computer Science.”

Last week’s Hour of Code represented so much of what we as educators seek in today’s educational system; student-driven learning, creativity, critical thinking, problem solving, perseverance and grit. It was an honor to witness such exciting learning environments and see first-hand the potential of our future generation of innovators. And that is the power of an hour!

One thought on “The Power of an Hour (of Code)”