Editor’s Note: this post originally appeared on the blog of BHS Help Desk junior Jhymon Moodie. To learn more about VloggedIn, and how it can help your students create a positive digital footprint, visit their site at vloggedin.com

Yesterday, I co-hosted episode 25 of Help Desk Live. It was a fun process and it was even better actually sitting down and broadcasting to a live audience. Mrs. Scheffer coached me a good amount in preparation for my first time co-hosting. She was very patient when it came to me remembering Cassie’s name (or was it Kelly? Hmm). She asked me to come up with questions, and as I presented what I had come up with to her, she told me why some questions were awesome, and why some didn’t work. Along with that, she helped me with the wording of certain questions to get a better answer based on what I asked. When it comes to my actual physical appearance, she recommended I look nice (of course) and to just try and stay calm; watch what you are doing while the camera is on you, and speak slowly and clearly. Personally, now that I have gone through the whole process , I can say without a doubt that her coaching was a great because I was so nervous and I didn’t know how to react when she told me on Monday morning that I was going to host a whole Help Desk Live episode. I didn’t think I could do it, but with Scheffer’s help, it was a breeze! At this point, with the coaching I’ve gotten, I feel confident enough to potentially do it on my own! 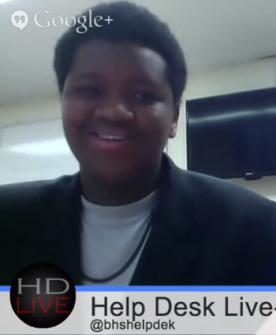 What I took from it most was to just be calm in your posture and facial expression when the camera is on you. Also, as I mentioned earlier, just speak at a relaxed pace and tone, and pay close attention to your guest! That is a given anyway, considering that it is a respect thing, but you truly learn some things while he or she is explaining what they are talking about wether it be a device, a network, a website, whatever it may be. Also, she never mentioned it to me directly, but as we switched camera views from us to the guest, and vice versa, I probably wouldn’t want  to perform a full on click with the ‘click’ noise because it comes up in the video and quite frankly, it annoys me. I would probably just do a tap of the mouse pad, because it does the same thing really and it’s more quiet.

Coming up with questions was hard and easy at the same time. The reason for that is because VloggedIn is new and intuitive and it sparked my interest. I wanted to learn more about it which made it simple to come up with questions. But the network is simple. It may sound like a good thing that the website is this way, but it isn’t, and here’s why. There isn’t much too it. I understand that it is a new site, and features aren’t something most new websites are full with often times, but when there isn’t much content or features, you can’t really come up with many questions 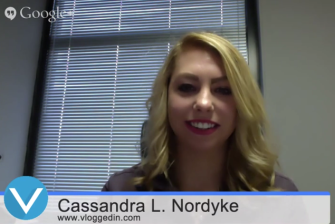 I would definitely host another episode in the future. It’s nice to meet new people and learn about their past and what it is they are being interviewed for. Again, I feel as if the coaching I received from Mrs. Scheffer was beneficial and has made me more equipped and ready to tackle an episode by myself. Give me a couple of run throughs and I will probably be a pro! To list a few skills I used while filming, I was told that it would be alright to have my questions by the computer just in case I forgot what my questions were, I could just look over to the side really quickly and remember again. But going back and looking at the hangout, I would probably make sure I dress better. I will also think about side comments and filler questions as the episodes go on.

It is my hope that something I’ve written will stick with those of you who plan on doing their own live online shows. The coaching I received was exceptional and 100% prepared me on what to expect. It is part of my hope also that you take the coaching that I have received from my instructor that I am passing on to anyone willing to read!

Check out the full episode of Help Desk Live below: